To study in depth  the letter form and create an interesting composition to promote one Typeface. The visual composition should reflect the characteristic nature of the typeface and should include a complete alphabet, typeface title and some text.

Started with and introduction to the topics, and an informative and inspirational look a designers work; Jan Tschichold, Muller Brockman; Watafak, Herb Lubalin. And to have open conversation as to what makes these good designs. We also considered the kind of language and vocabulary used to describe these images. Also to be given an idea as to what gives them balance.

We were each given a font to study, and mine happened to be the troublesome Stone Sans ( why troublesome become clear later). I do happen to like this font due to its appealing cleanness and simpleness.

We were to divide layout paper into 25 sections, and in each section trace through parts of chosen letters, and fill in negative or positive space with black marker. Larger  versions of the chosen letters were printed out for us to enable this exercise.

This is where the troublesome font first shows its nature. Although Vicki loaded this into InDesign, the printer repeatedly printed out another font. This happened three times, with a different font being printed each time, before they got over the issue by turning the font into picture format before printing.

So with this font I did the exercise with some interesting results. Good study of the form.

Between this week and the next I had a look at the listed designers and at who designed the Stone Sans font.

We continued with the exercise, looking perhaps a little more closely at how these shapes could be used in a design. Also printed out some of the designers graphics and reference and inspiration.

We then began to make thumbnail designs using our given font.

I have been unable to install Stone Sans font on my own Mac for further study. This is when the font shows its true troublesome nature, as it simply refuses to show up in the list of fonts, and it cannot be installed, and it is not a default font available on other Uni Macs.

I also happen to notice that the ampersand that had been printed, and included in my work so far, was not a Stone Sans ampersand.

With these issues in mind, and now knowing that this font is not a default font, and is not installed throughout the Uni, and isn’t  installed on my own Mac , without a hefty purchase cost, I felt this would be a disadvantage when it came to completing the exercise.  I decide to choose a font myself, and after looking at every font installed on the Mac, I chose Gill Sans, as it seemed the closest match.

Now using Gill Sans, I used a mix of InDesign and Photoshop to replicate the earlier exercise. Following that and whilst referencing the printouts of the professional designers, I began to make my thumbnails.

The first few were drawn directly onto blank A3 paper, but having done this two things occurred to me.

With this in mind, I have decided to print out A3 paper with 9 correctly scaled  blank thumbnail boxes to fill in. And whilst doing this I also notice differences in some of the letter between the regular and italic counterparts. I later searched for the original Gill design to see if this was correct, and it was.

Following making a number of thumbnails, I chose 5 which I felt were the strongest, and enlarged them to A4 and retraced them, making adjustments in the design for better balance and layout.

Out of the five, the two below were enlarged to A3 ready to present next week.

I also looked at the possibility of using two of the pictures together, but following direction from Vicky, it became clear that this was not a good route to take.

Sticking with the following design we did a group critique of everyone’s design, analysing and feeding back openly which designs met all of the criteria.

I also felt that many of my thumbnails were very geometric in their design because this reflected the geometric nature of Gill Sans. Having taken on board feedback, I felt this was the design I would take forward to the final.

We also had a brief on grid layouts, and an introduction to InDesign.

Between now and next week I worked on producing the design using both Illustrator for the main graphic, and InDesign to pull it all together. Making some minor adjustments to the final image.

I also looked at part of the image on its own, playing with the space around it. 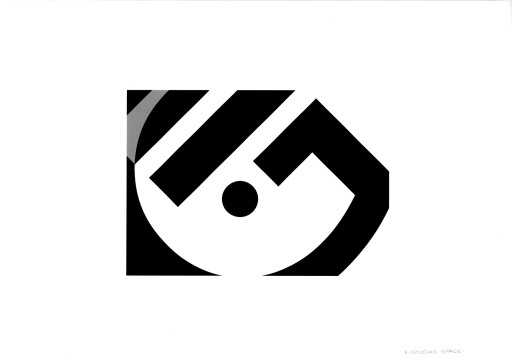 ← Visual Data – Who do you think they are?
Packaging →